Looking for more energy, clearer skin, a lovely figure, and stronger bones? The benefits of coconut oil and milk could be your answer! Coconut milk is one of many nutritious and delicious substitutes for cow's milk. Coconut complements pineapple, peach, and mango with a rich creamy flavor. Coconut milk is not only a great way to add flavor and cream to a smoothie, but many of the benefits of coconut oil and milk don't get a lot of publicity. 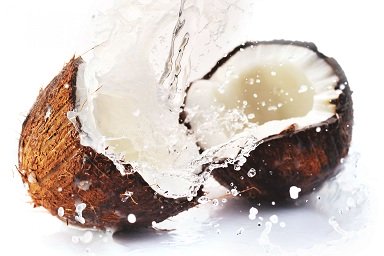 The distinguishing feature of MCTs so important to coconut nutrition is that they are burned faster than other types of fatty acids, and they are especially beneficial for providing energy for the lymph nodes and liver.

MCTs are absorbed only by the older, more highly differentiated fat cells, rather than fat cells formed after exposure to certain medications (such as the diabetes drugs Actos and Avandia). Once inside the cell, they form smaller droplets that are more easily joined by enzymes and more quickly converted into energy by the cell. MCTs are less "fattening" than other kinds of fatty acids.

Coconut milk, like the "meat" of the coconut, is rich in the benefits of coconut oil. Virgin coconut oil is 50 to 55 percent lauric acid. This fatty acid stops microbial growth. As a result, foods prepared with coconut lasts longer. Coconut oil stays fresh at room temperature for up to a year.

The lauric acid in coconut milk is also effective against the principle bacterium involved in acne, Propioniobacterium acnes, due to its antibacterial properties. The lauric acid survives digestion, enters the bloodstream, and is attracted to the sebum created in pores of the skin. Dissolving in the sebum, it can slow down the growth of the acne bacteria that feed on excess sebum. Not so much that they cannot do their job of "clean up," but it is enough that they are less likely to multiply out of control and become those dreaded blemishes.

Although too much of a good thing is possible, even when you are considering the benefits of coconut oil. As it is with any food, moderate amounts of coconut oil from coconut milk stimulate thyroid function and encourage weight loss.

Even the Asian farmers avoid feeding coconut to farm animals they want to fatten up. Using coconut oil in moderate amounts, up to about 2 tablespoons (30ml) a day, in place of other oils, may help you lose weight (about 1 pound or half a kilo a month) even if you eat the same portions of other foods. You can get the same result from using 1/4 cup of coconut milk a day in your smoothies.

Coconut milk helps prevent gingivitis. Indian dental researchers of coconut nutrition have found that the fleshy tissues surrounding the teeth survive longer in coconut milk than they do even in other antioxidant preparations.

Tips for Blending a Coconut Smoothie 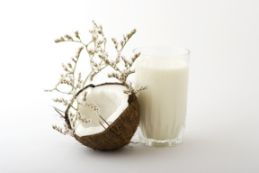 Coconut milk is not the watery fluid inside a coconut. Instead, it is an oily, milky, sweet fluid extracted by squeezing the freshly extracted meat of the coconut.

Store the unused coconut milk in a glass container in the refrigerator or freeze in an ice cube tray. Allow time for it to come to room temperature before using it in your next smoothie. You could double your coconut smoothie recipe and share it with a friend.

Some people can be allergic to coconut. You might want to try just a very tiny amount of coconut milk first before you try an entire smoothie. You may want to avoid coconut milk altogether if you have ever had an anaphylactic reaction to coconut or coconut oil.

Want 135 energizing smoothie recipes all bundled into a convenient handbook? Check out my ebook, Smoothie Handbook for Health.

The contents of this website are based upon the opinions of DaNae Johnson. The contents are not meant to diagnose, treat, cure or prevent any disease. This website is for sharing knowledge and information from the research and experience of DaNae and should not be used as medical advice. DaNae encourages you to make your own health and nutrition decisions based upon your research and discussion with your own qualified professionals.

Earn an income doing what you love! I did! Smoothie Your Way to Radiance! © Copyright 2009-2012 DaNae Johnson - All Rights Reserved