The Tuna-Egg-Cheese-Milk Smoothie of Doom! 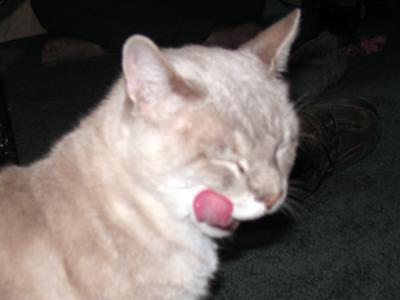 We have a Vita-Mix blender. It was expensive, but we both like smoothies and we use it a lot. So we decided to get it as our Christmas present to each other a few years ago.

You can supposedly do everything with this blender except use it to book airline flights, but all we ever do is make smoothies for ourselves and our grandchildren.

The grandchildren are always very impressed with the way it blends ice up into undetectable mush, and they don’t realize that we use the same approach to add things that are good for them, but which they claim not to like, into the smoothies.

Besides the visiting grandchildren, we also have a cat. He’s almost like a child, and I know he is pampered like one.

Last week I came in and saw that my wife had made a smoothie. I didn’t see her make it, but there was some left in the blender. I poured it into a glass and gave it a try. It was awful! After just one drink, I poured it out.

A short while later my wife came into the house, followed by her purring cat.

“I made the kitty a smoothie,” she told me, very pleased with herself. I just looked at her.

“His favorite things: a little bit of tuna, an egg, some cheese and some milk. I was going to put in some canned cat food, but we are out. We need to go get some before this evening.”

I didn’t say anything, but privately thanked God that we were out of canned cat food...

Want 135 energizing smoothie recipes all bundled into a convenient handbook? Check out my ebook, Smoothie Handbook for Health.

The contents of this website are based upon the opinions of DaNae Johnson. The contents are not meant to diagnose, treat, cure or prevent any disease. This website is for sharing knowledge and information from the research and experience of DaNae and should not be used as medical advice. DaNae encourages you to make your own health and nutrition decisions based upon your research and discussion with your own qualified professionals.

Earn an income doing what you love! I did! Smoothie Your Way to Radiance! © Copyright 2009-2012 DaNae Johnson - All Rights Reserved